The Girl Who Didn’t Belong

“How do you speak English so good?”

I looked at the boy walking beside me. He was wearing shapeless, faded blue jeans and a slightly oversized sweatshirt. He proudly sported a cap. Emblazoned on the front of the cap was some kind of blue bird and a red maple leaf. I recognized that maple leaf from the Canadian flag.

“Sorry, what did you just ask me?” I replied. Perhaps I had misheard. I had just told the boy that I had arrived in Canada about a week ago, shortly before moving into my student residence which would be my home for the next four years.

The boy and I were walking around the University of Toronto St. George campus, participating in an orientation week scavenger hunt. We had both lost interest in the hunt relatively early.

Having spent most of my life in a city where everyone drove their cars everywhere, I was not impressed by this supposedly fun walking activity designed to help us get to know the campus better. Evidently Jason was more interested in talking to me than helping our overenthusiastic teammates decipher the next clue. Everyone on our team was sporting the same bright yellow t-shirt, representing our particular residence, one of seven residences spread across the campus.

“How come you speak English so good?” he repeated in the Canadian accent I had quickly become accustomed to.

As a stickler for grammar, I mentally corrected his sentence to “How do you speak English so well?” I opened my mouth to reply and then shut it again.

“What do you mean?” I ventured cautiously.

“Well, you said you only came to Canada, like, a week ago, right? So then how come your English is so good?”

“Umm,” My bewilderment was apparent. I drifted back to my British Ordinary and Advanced level examinations in English and English literature. I had received ‘A’s in both.

I attempted an explanation, “I’ve been speaking English all my life. I mean, I went to an English speaking high school and my family speaks English.”

“Huh…I didn’t know that people spoke English in… you said you were from the United Emirates?”

“The United Arab Emirates,” I corrected automatically, “Yeah, I guess I’m from there, I spent most of my life there but I’m actually Sri Lankan.”

“Cool. I knew a couple of Sri Lankan guys in my high school. ”

I hesitated only momentarily before blurting, “People do speak English in other parts of the world you know.”

“Yeah I knew that, it’s just cool,” he shrugged dismissively.

For a few moments, there was silence between us. I wanted to say more but ignorance is not easy to wrap one’s head around.

We had been walking around the campus for over an hour. It was highly likely that our team was walking in circles around our next target. The more I saw of the campus, the more intimidating it became.

Jason and I were lagging behind the others who, from their excited yelling and quickened pace, I inferred had finally figured out the clue. We were led through a tree-lined, cobblestone pathway that opened onto a vast, circular field. The grassy field lay beneath a promisingly blue sky. The surrounding buildings were formidable. On the opposite side of the field was a castle that looked like it was from another century. I reminded myself that it likely was.

Some people were kicking around a football on one side of the field. Others were reading lazily on the grass. I felt a familiar twinge of nervous anticipation. This was the setting for the beginning of my life. I had been looking forward to this for a long time and now that it was finally here, it all felt surreal.

I stole a glance at Jason. I had never walked beside a boy alone without worrying what people would say. Growing up in the United Arab Emirates with parents who weren’t too keen on me having male friends meant that I never really spent any time with those of the opposite gender outside of the classroom. This was a new feeling. I felt … rebellious.

I broke the silence with a question “Where are you from Jason?”

I had heard of Scarborough. Someone had joked that Scarborough should actually be called where you get “scars-bro”. I had laughed only because everyone else had.

“Have you lived in Canada all your life?” I was curious.

“My parents are from Korea but I was born here. I’ve never been to Korea.”

We were strolling around the perimeter of the field and Jason was distracted by the people playing with the black and white football. Football is a popular sport in the United Arab Emirates. It was a balmy September day, although probably not as warm as it would be back home.

I noticed that our teammates had rounded a corner and were now out of sight.

I caught Jason’s attention, “We don’t want to lose the others.”

Our bright yellow shirted team had doubled in size, apparently having run into another team from our residence. Momentarily united, they were engaging in a shout-off match with some other students, who were sporting deep blue t-shirts.

As we approached the gathered crowd, Jason took off ahead of me to join our group, slipping off his sweatshirt to further reveal his yellow t-shirt in a symbolic gesture of allegiance. 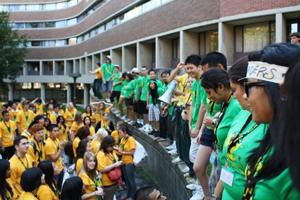 A couple of days earlier, on the first day of orientation week, our leaders had informed us that each student residence would be wearing t-shirts of a different colour. Making fun of each other was highly recommended and was part of the good-natured fun. We had practiced chants and possible comebacks. The group of new university students had been loud and boisterous but I had enjoyed the energy and spirit as I became invisible in a sea of yellow. I had echoed the shouts around me and when my throat eventually felt sore I just grinned widely at everyone else. I had never been encouraged to shout before.

Shouting would become significantly less fun in the subsequent days.

I scanned the group of students with blue t-shirts. They had a leader with them who was bellowing into a loudspeaker. They were moving in unison. Like some cult.

“96 percent!” they yelled while pointing at themselves. “69 percent!” and they pointed at us.

A couple of people from my team bellowed back, “ner-rds, ner-rds, ner-rds” in a sing-song voice. The rest of the yellow shirts joined them; their collective voice grew increasingly louder and more mocking.

I had only heard the term “herpes” once before in my life and although I had inferred that it was something embarrassing of a sexual nature, I knew little else. Doubt crept into my mind. Maybe I was wearing the wrong colour. I shifted uncomfortably in my own silence, blocked visually from the perceived “others” by my yellow-shirted comrades.

Eventually, the shouting died down, with much mirth, and the groups went their separate ways.

On our way back to the residence, everyone was in high spirits and reliving the encounter with the other student residence.

“I can’t believe they threw 69 in our faces,” laughed one of the girls.

I trailed behind everyone, wondering what “69” possibly meant. I was going to look that up when I got back to my room. One thing was for certain, university was going to be a highly educational experience.