Want to know what leading global health practitioners, researchers, policymakers, physicians, nurses and others are talking about today? Well, the Global Health Summit: Creating A Pandemic of Health is a good place to start. [You can watch the sessions here]. Based on the sessions I attended, I came away with ideas, thoughts and many, many questions.

At the opening ceremony, Paul Dalla Lana and family announced that they would be doubling the $20 million donation they made 5 years ago. The response was huge applause. The financial backup can keep momentum going in a field that aims to be proactive within a society that still predominantly favours the reactive (aka biomedical).

Someone in an “elite” business school informed me that any major donation is usually pocket change and one that the donor doesn’t miss. Is that the case with Paul Dalla Lana and family’s donation, because if so, that is amazing. 20 million dollars. I honestly cannot imagine what that looks like. I can’t even imagine what having 1 million dollars would look like. 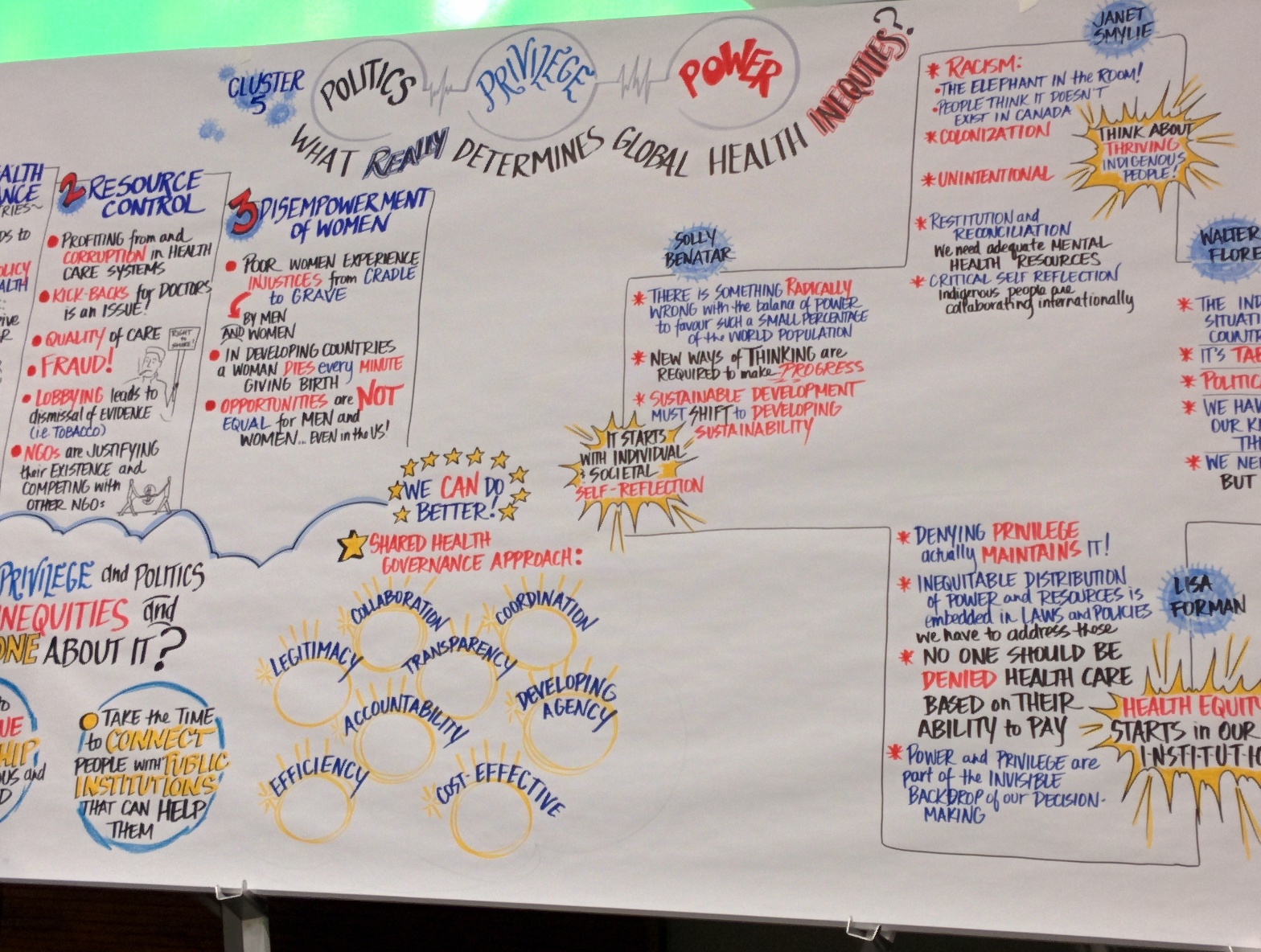 Janet Smylie made note again that the poor health of indigenous people is at unacceptable levels and yes, racism still exists.

Walter Flores spoke passionately about how research is not enough, knowledge needs to be applied to advocacy and bringing about change in power and politics.

Lisa Forman stated that health equity does not need charity or philanthropic action. It is in itself unjust and systemic. So health equity is not therefore the role of any one sector. Why aren’t all actors – state and non-state – forced to confront this reality?

Solomon Benatar mentioned that our thinking today is “excessively individualistic”.

Taxation and donations all need to be put into context. The truly Honourable Marc Lalonde (author of the Lalonde Report) said that if he had one wish, it would be that there was less disparity.”Well fare for all”

Can we have less disparity without education for all? Without generosity? Can we address disparities when self-interest is a primary objective of institutions?

The money that Paul Dalla Lana and family donated, will now be redistributed, and I can only hope that the Dalla Lana School of Public Health at U of T itself will truly acknowledge its own privilege and power.

Sometimes you get a head start due to privilege or due to luck; some may consider those words interchangeable. Working hard, working smart and working fair are never guaranteed to get you in with the people who make millions, but it does make for a good work ethic. When are hard workers exploited?

“Leave Your Egos At The Door”

I really appreciated this “rule” stated by Rani Kotha on Day 1. Big names in global health can only really collaborate with loan-ridden students if some of the power dynamics are acknowledged upfront. I can understand that research requires funding. I cannot understand how research on health equity can advertise nonpaid positions.

Canada’s policies should consider these words. For example, highly-qualified newcomers are often told they don’t have enough “Canadian experience”. People need to eat and pay for a roof over their heads. These are disparities. Inequity is right here in Canada and we don’t need to look to other countries.

If U of T and its collaborators want to move global health equity forward, it will start at home and with itself.

During the summit, we have been encouraged to ask the unaskable questions. So I innocently ask, why is it that the top decision-makers and leaders in positions of power are white and/or male? Despite there being far more females in the field. Despite people of colour being just as intelligent, capable and educated. We need to look at ourselves within public health. Look at the councils, boards, of schools, of health units, those at the top of the hierarchy.

This is not about affirmative action, but rather acknowledgement that there are barriers within our public health sector itself. Barriers that we can talk about in society all we want, but we ourselves are not immune to. Otherwise, we are just being hypocrites.

The new mayor of Toronto doesn’t think white privilege exists. That is unhelpful.

Lisa Forman noted that concepts like health equity and solidarity are seen as “economic obstacles to progress”. The words themselves are made taboo.

How to pitch humility to those with power? The notion that perhaps we can’t see everything, that privilege does perhaps exist and that at the very least we can acknowledge how we’re better off than so many others.

How to pitch equity and advocacy to those who experience inequities? The understanding that a quick fix won’t help in the long term, that while surviving it is sometimes necessary for us to look towards thriving.

We need to turn these concepts, these ideas into action, how to operationalize all this? There was some discussion on this although it still remained fairly high-level.

Ross Upshur self-declared himself as pessimistic but he sounds like a closet optimist. Prabhat Jha referred to data to support how much public and global health has advanced. It was an interesting space to see big names and thinkers come together although I would have liked to see more community members, students, front-line workers at the privileged podium. We have heard many of these issues before, although hearing them all at once does leave one with the enormity of the issue.

It is those people who are resilient, optimistic, self-reflective and humble who have a shot (pun intended) at “creating a pandemic of health”.