Candles, starry nights and stories with my grandmother

As the sky turned orange and pink with the setting sun, the humming ceiling fan lazily slowed down to a standstill. Another power cut.

The outer doors of the house were usually closed around dusk to keep the mosquitoes out. But with the power outage, the hot air inside soon became stifling. As my grandmother opened the outer doors, a cool breeze swept across my cheeks.

My younger brother and I obediently followed our grandmother, our umamma, to the kitchen. She pulled out some matches and candles. We carried them with us and the three of us sat on the doorstep, overlooking the garden and watching the sky turn from purple to black. Silence, except for the occasional sound of crickets. 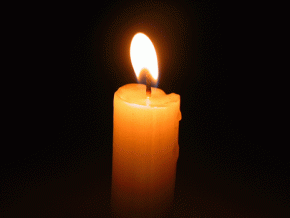 The flames danced atop the candles, casting shadows across my brother’s face. Creating shadow puppets with our hands and fingers was always a good way to pass the time. My favourite was a wolf, which would transform into a harmless rabbit. When shadows became boring, we would play with the hot wax dripping off the tall candles. Scooping the wax quickly off near the candle wick had that element of risk necessary to make any game more fun. Rubbing the wax between our fingers would cool it enough so we wouldn’t get burnt, but keep it warm enough to be malleable. I would carve the wax with one of my umamma’s bobby pins.

Food tastes better in the dark. We would have fried rolls and patties with tomato ketchup, followed by butter cake. Cream soda would wash everything down quite nicely.

My umamma would tell us stories about our mother when she was young. She would also tell us about our aunts and naughty uncle. My favourite story was how my parents met. Apparently my father saw my mother while she was working in the garden at the top of a hill. He thought she was very beautiful and knew that he wanted to marry her.

I later found out that no such thing had happened and that my parents were introduced and had an arranged marriage. Mischievous umamma… but I had wanted to hear about love and my grandmother had only wanted to oblige.

It was very hot and umamma would fan herself. My brother and I would offer to do it for her sometimes, but our arms would quickly become tired. A breeze was always welcomed with an “oooh” as it lifted beads of sweat off our foreheads.

Looking up, the vast sky was sprinkled with stars. A brief twinkle near a tree. There it was again, glowing brightly and then dimming as it moved across the shadowy garden. Fireflies! I was up on my feet in an instant. I could feel the blades of grass tickle my feet through my bata slippers. I cupped my hands gently around the glowing light. I caught it! The soft light made my hands glow like a lantern. I would go show my umamma.

And then, suddenly, a buzzing sound from inside the house. The fan had started moving. Lights flicked on and the television was switched on. I slowly opened my fingers, and the firefly glided away into the dark night.