Will Toronto soon have Open Streets?

Imagine a 15 km street corridor in Toronto where pedestrians, cyclists, rollerbladers, skateboarders and other non-motorized means of transportation take over the streets. This is what the Open Streets Program by 8-80 Cities hopes to see in Toronto. 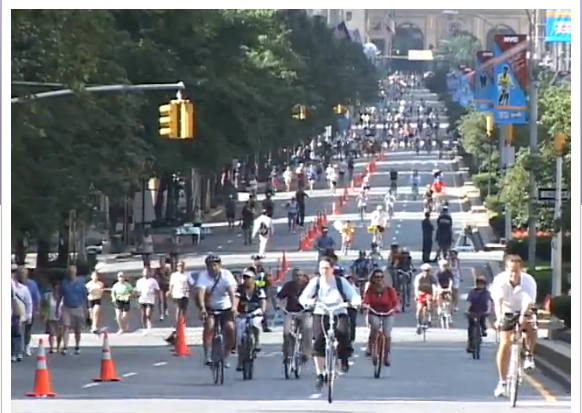 The Open Streets Summit, organized by Councillor Kristyn Wong-Tam convinced me that just such a program is in fact possible in Toronto. In attendance were Dr. David McKeown, Chief Medical Officer, and Jacqueline White, Director of Transportation Services who supported the proposal.  A staff report is currently in progress (although several months overdue) and is to be delivered to Councillor Wong-Tam for review, to be followed by a motion to City Council for adoption. The projected timeline is to pilot four open street events in 2014, from May to Labour Day weekend. There is precedent for closing streets in Toronto as it is routinely done for festivals along major street corridors. A potential long-term goal is to have a year-long program running every weekend as is currently done in other cities. A similar program has been successfully implemented in other cities including New York City since 2007 (1).

In Toronto, only 42% of adults are physically active during leisure-time (2). 40% of adults and 22% of adolescents between 12 and 17 are either overweight or obese. 93% of youth do not meet the daily recommended amount of physical activity. In 2012, 29% of all Torontonians were diagnosed with major chronic health conditions, an increase from 23% in 2001 (2,3). There are a number of obvious benefits from the program such as increased physical activity and increased community engagement which can lead to better physical and mental health among Torontonians.

More interestingly, the Open Streets programs serves as a stepping stone to improving the reputation of cities as healthy spaces to live. Both prominent policymakers and the public have closely-held beliefs that high density spaces such as cities are congested, unhealthy and not an appropriate environment to raise children. Despite the evidence to the contrary, these strongly held beliefs present a barrier to promoting active and engaged cities through investment in infrastructure and parks. The Open Streets Program can facilitate a change in ideology where high-density cities are seen as healthy and vibrant spaces.

Another key issue of contention brought up at the summit was the location of this open street corridor (1). In the interests of a successful pilot project, it seems likely that the chosen site will be a street corridor with accessible public transportation along a subway line. Yonge and Bloor/Danforth streets are contenders for this very reason. However, from an equity and health perspective, it is probably those who are living in pedestrian-unfriendly neighbourhoods without access to public transport and safe recreational space who would benefit most from this program. Pilot projects such as the Open Streets Programs should determine where maximum positive impact can occur through considering the health disparities between neighbourhoods as potential indicators.

See Guadalajara’s Via RecreActiva – The World’s Most Transformative Ciclovia