One Year Later – The children’s book Dancing in the Rain

A lot of discussion and thought went into writing the book Dancing in the Rain, with respect to what is acceptable in and expected of a children’s book. I struggled with the content, language and scope of the book. There was a genuine desire not to offend and for the book’s main objectives to not be misunderstood. These objectives were:

In the year since the book was published, I have had concerned parents tell me that childhood should not be about challenges and hardships, it should be about happiness and learning and growing and having fun. I wholeheartedly agree. However, reality can be very different. There are many, many children who are forced to “grow up” before their time and deal with realities far beyond their age. In writing the book, I wondered if there is too early an age to learn about loss, sadness and illness and to cultivate empathy, understanding and resilience.

I was further convinced that the content of the book was necessary when I worked with children and youth who were dealing with very harsh realities. If these children are in the minority, or the assumed minority, it is even more important that issues be put out there – to be acknowledged, to be discussed, to be considered. With Dancing in the Rain, I hoped to do so in a positive, honest and progressive  way.

Bringing it all together required much analysis and constant reflection. 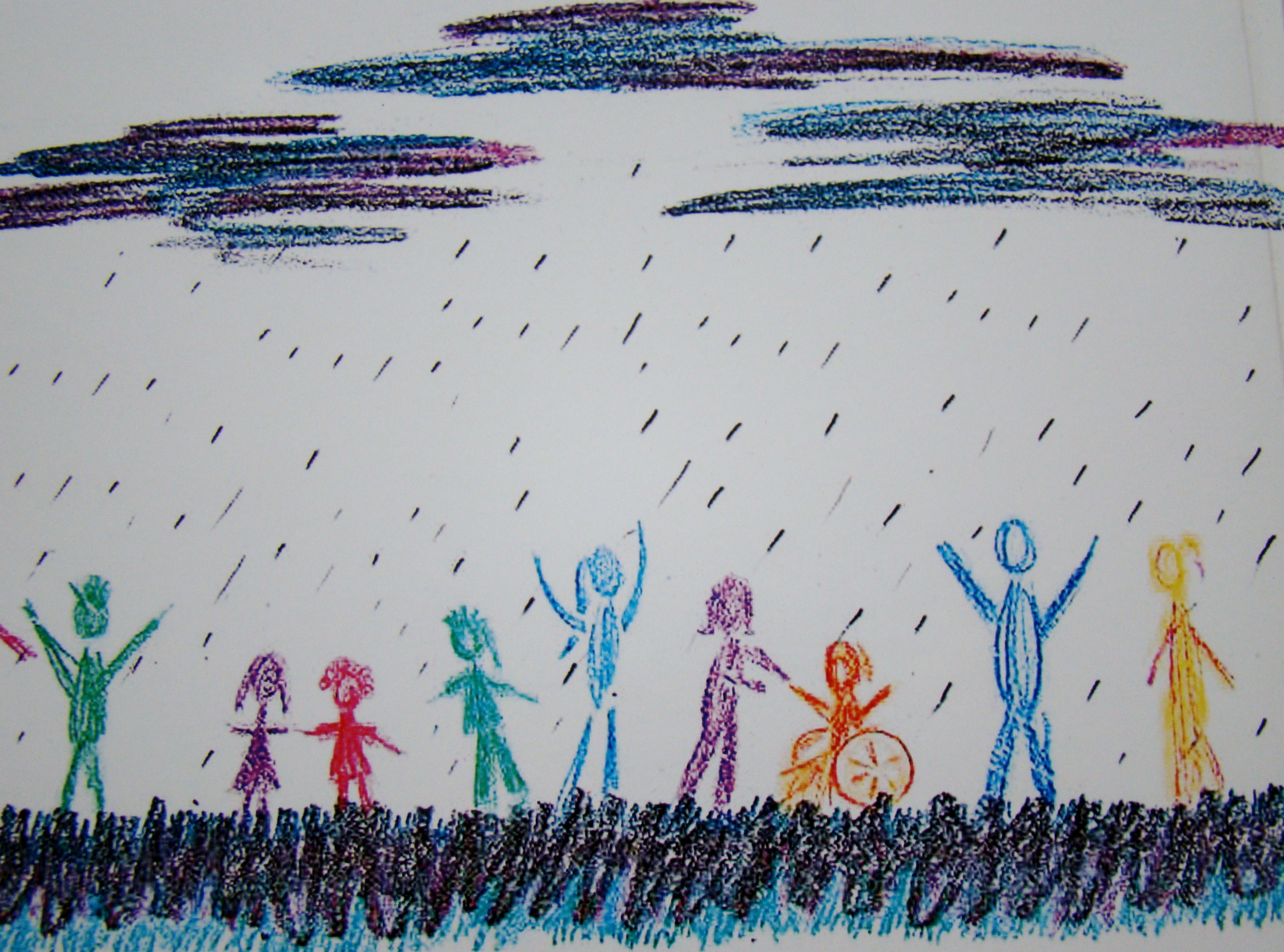 The stories are vignettes and a glimpse into the lives of people in a community. In writing the book, I had to fully develop and understand the background, lifestyles and challenges that the characters faced as well as make sense of all their relationships. This process was a difficult one and was no doubt informed by my own experiences and identity. I imagined this close-knit community in detail. My mind was so occupied by this book that I was continuously reminded of the characters in my everyday activities.

I developed a rich and detailed background (including demography) for almost every character. Behind the stories, there is an intricate understanding of this community. As a result, I had to make conscious decisions about how much background information to disclose in the children’s book. I realized that I was consciously attempting to challenge and explore existing social constructs of ethnicity, race and culture and how this plays out in a multicultural community. I was also seeking to question common notions of what a typical family is and the perceptions of what a “normal” family dynamic should be. Out of this challenging process, a fascinating internal dialogue took place.

I was forced to confront my beliefs, my values, my understanding of the world.  I was made aware of my preconceived notions and of the reality that I was constructing for my characters. I constantly tried to be aware of any stereotypes I might be applying, any personal judgements that I might be unconsciously imbibing into the manuscript. It was exhausting.

Reconciling the vision I had for the book while grounding it in reality was a difficult thing in a children’s book. I continuously ran the risk of oversimplifying, the risk of generalizing and the risk of offending. There were definitely times when it seemed easier to keep the stories in the form of a manuscript and just stop there. I do not feel that the manuscript would ever have reached a point where it addresses every single criticism – but, that can be said of most books. Having said that, I do think that the book Dancing in the Rain has multiple levels of meaning, and can be interpreted differently depending on the reader.

I was 17 years old when I started writing Dancing in the Rain.

I published the book 5 years later. During that time, my writing style was of course still evolving. There is no doubt that the language of the stories I wrote first differed from those I wrote later on. As I approached publication, I was constantly second-guessing the writing style and vocabulary that I had chosen. Through editing, I found that I was gradually changing the essence of some stories and sometimes it was necessary for me to go back to the original drafts. I came to realize that with editing, there is a danger of losing some of the raw emotion and often random nature of human thought and behaviour. I came to realize that for the purposes of this children’s book, it was important to be true to the mindset in which I initially wrote the stories. I am finally becoming more comfortable with my decision to respect my younger self and her experiences by preserving as much of the original writing as possible.

I may not have been fully aware of it at the time, but writing, illustrating, editing and eventually publishing Dancing in the Rain was a very personal experience. Today, I am aware that the book elicits very poignant memories for me. Now, one year after publishing the book, I am very glad that I went through with it. This book addresses difficult childhood situations that are not acknowledged by most. This book is about celebrating life. It is also meant to incite discussion and seeks to encourage thought and action in how we strive to recognize, understand, address and overcome issues that affect children and youth.

Finally, I’d like to sincerely thank everyone who has supported me over the last six years in what has been an incredible journey.