Ever since my cancer diagnosis, it has become more apparent to me that people hesitate in using the term “cancer”, especially around me. Sometimes the term is whispered. It is sometimes called the C-word or people will just avoid using it. There have been instances when I have had to just say the word out loud because I can’t stand the “elephant in the room” feeling where no one will voice what it happening. I say the word “cancer” not in an attempt to be brave, but because that is what it is. I was diagnosed with cancer. I can’t hide from it, not anymore.

Although I have received a number of supportive messages, there have also been people who haven’t reached out to me despite knowing the news. Not that anyone is obligated to but I have found out that this is for a number of reasons, ranging from them wanting to give me my space to honestly not knowing what to say to me. That is okay. Not everyone is okay with the disease yet, there is still much we don’t know about it, and the unknown is scary. 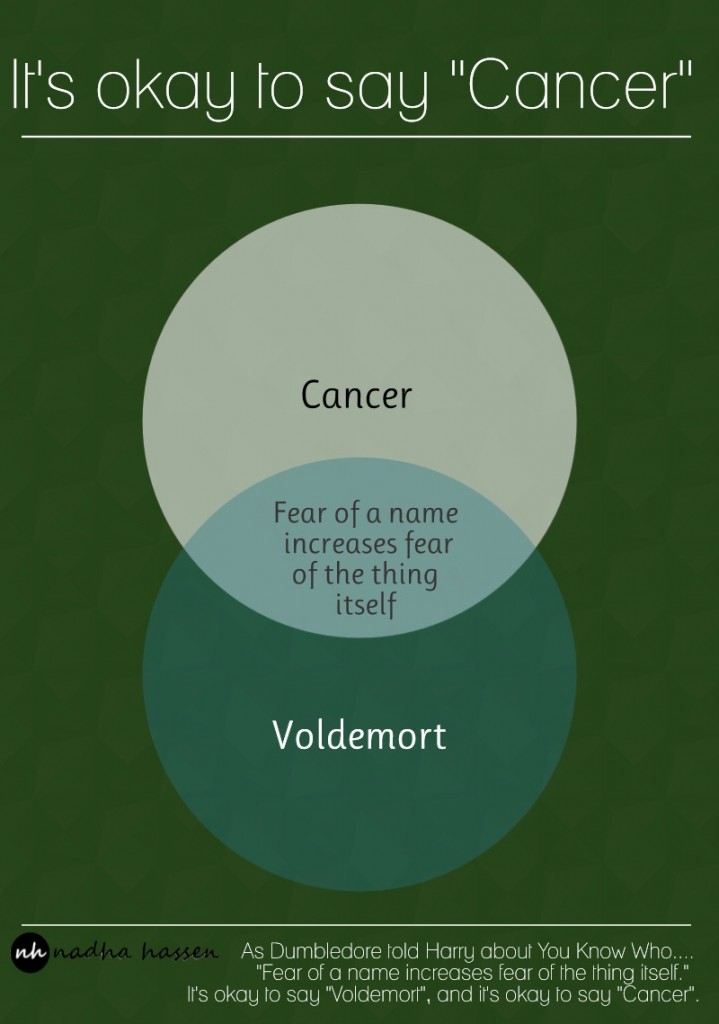 I liken the situation to what Dumbledore told Harry about You Know Who…. “Fear of a name increases fear of the thing itself.”

For those of you who aren’t avid Harry Potter fans, let me elaborate. I don’t want to be afraid of cancer. I hate it, I despise it, I wish it didn’t exist and I wish cancerous cells could reverse malignancy and shrivel up and die. So I refuse to give the word, cancer, any power over me. Cancer sucks. In fact, use any expletive along with the word “cancer” and I won’t object. I started semi-joking with my family about having cancer, mainly to lighten the mood in the initial days after the diagnosis.

On the crowded subway: If I announce that I have cancer, do you think someone will give me a seat?

At Tim Horton’s: Can I cut in front? I’m hungry and I have cancer.

At the airport: Do you think I can get upgraded if they know I have cancer?

My brother and partner have caught onto this now and I smirk when they say something along the lines of, “We’ll get a good seat this time because we’ll tell them you have cancer.” For the record, we’ve never actually done any of this. Using the words “I have cancer” has been liberating in many ways. If I can say it, then it can’t be that bad. It just… can’t be.

At the end of it all, there’s a deep sadness underlying the humour and teasing. I can’t laugh cancer away, but it helps, because I physically cannot be that sad and angry all the time. We have to figure out some way through the challenges. I couldn’t pretend cancer away or run away from it, so I suppose my (somewhat inadvertent) tactic was to tackle it head on, by calling it by its name. It’s been working so far. I feel stronger when I use the word. I am a worthy opponent and we will battle it out, cancer.