AIDS 2012 was a life-changing experience for me. The diverse and passionate voices of people from around the world came together to speak up about the issues affecting people living with HIV, share ideas and knowledge and discuss how to move forward together. Out of this hectic and highly informative week, 11 overarching themes started to emerge from the sessions and workshops that I attended. I have listed them below, in no specific order:

A major underlying theme of the conference was human rights as an approach to HIV and AIDS. The fact that sex workers and injecting drug users were not allowed to enter the country to attend the conference was a source of a number of protests throughout the week.

CSE within schools was a source of much debate as people from all over the world discussed the importance of informing young people about their sexual health and reproductive rights. The importance of safe sex cannot be emphasized enough as it is an important means of preventing new HIV infections. 41% of all new HIV infections worldwide occur within those aged 15 to 24.

“Stigma is a social infectious disease.” That was the definition of stigma provided during one of the workshops. There have been extreme cases where a person living with HIV has died – not because of the virus, but due to the immense discrimination and intolerance shown towards him/her because of their status. Culture and religion has a role to play within societies that actively discriminate against those living with HIV and AIDS.

4.       We have the tools, but we need to scale up treatment and prevention

Researchers and scientists have come a long way and we know have the knowledge and effective tools to see the end of HIV and AIDS. Some of these tools include safer sex through condoms, male circumcision,  pre-exposure prophylaxis, treatment as prevention as well as preventing vertical transmission during pregnancy, childbirth and breastfeeding. Successful prevention and treatment programs need to be scaled up in order to reach key affected populations.

We cannot underestimate the importance of education and awareness when we are looking at future of zero new infections. For instance, many people in North America think that HIV and AIDS is something that exists in Africa and not in their own society. Currently, there are 1.2 million people living with HIV in the United States1. Education is also essential in reducing stigma and to increase understanding of exactly how the virus is transmitted.

6.       Taking information and knowledge back to our communities

The conference brought together over 24,000 delegates from all walks of life and was an incredible opportunity to pool our knowledge and experiences. Every delegate has the responsibility of taking what they’ve learned back to their community and implementing and incorporating lessons learned into their work.

Another source of passionate protests was fact that many people living with HIV do not have access to the correct treatment due to unaffordable, high prices. When life-saving drugs are available, it is unthinkable that someone should die simply because he/she cannot afford it.

Social marketing was put to use as a means of advertising safer sex – thereby reducing the risk of HIV transmission. Some workshops emphasized that we cannot speak about sex without including love, romance and pleasure. 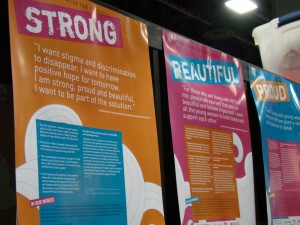 Due to biological, social and cultural reasons, women represent a larger percentage of those living with HIV and AIDS. A holistic response to the epidemic needs to take into consideration the social determinants of health including gender disparities.

There have been a number of initiatives to help in the fight against AIDS including PEPFAR, Global Fund, World Bank and the Bill and Melinda Gates Foundation as well as governments and others. However, sustained funding commitments are necessary to ensure continued progress and that we do not slip backwards. 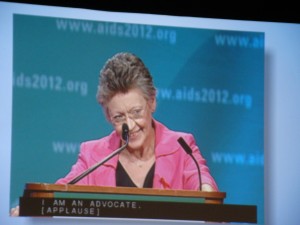 Nobel Laureate Francoise Barre-Sinoussi says, “I am an advocate” to much applause

I learned that advocacy is instrumental in bringing about change. Without individuals who are passionate about what they do and what they believe, many of the positive changes that have come about would not be in place today. In moving forward together, it is critical that we each work to break down myths that perpetuate stigma, raise awareness of the rights of every person and strive towards a future where HIV is in the past.